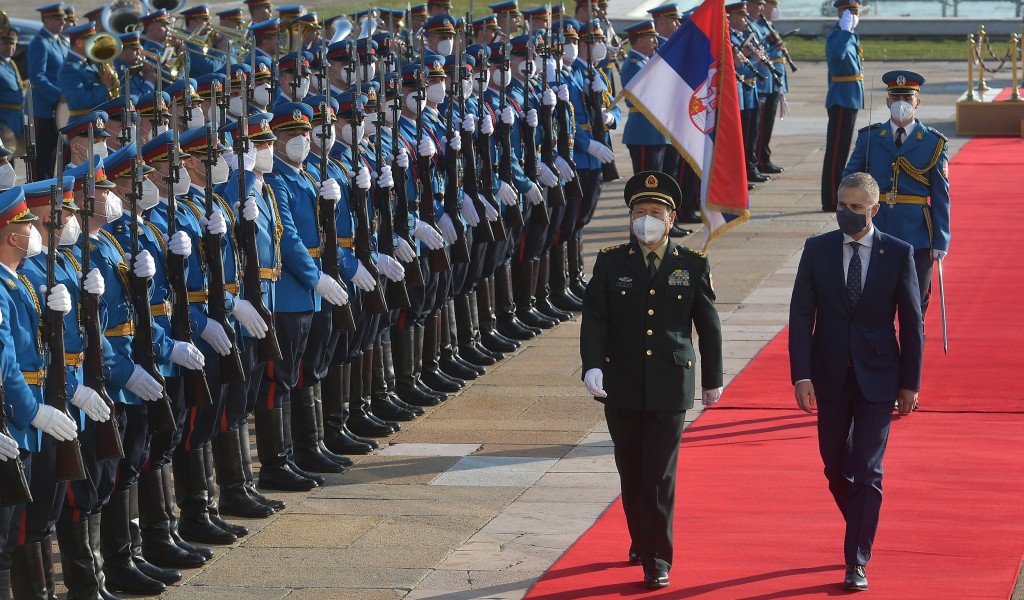 Chinese defence companies banned in the US are finding new markets in the Western Balkans. While Serbia is the only European country to have actually bought missiles and armed drones from China, other countries have opened themselves to these companies in their infrastructure sectors.

Just Finance has been mapping the activity of state controlled Chinese defence companies in the region, including donations of military gear and Covid-19 equipment.

Serbia’s purchase of missiles and armed drones made it the first European country to enter a defence cooperation with China. Serbia also allowed Chinese security forces to train on European soil.

Bosnia and Herzegovina has received three Chinese donations of military equipment for its army’s Engineering Corps. The last, with trucks and bulldozers worth EUR 1.3 million, was received in March 2021.

The country’s recent NATO membership has decreased its military cooperation with China. Despite several approaches, no Chinese defence companies have been contracted for civilian infrastructure projects.

At least nine large Chinese defence companies are active in the Western Balkans, either on the civilian market or in the military sector. Most have been banned by the US for violations of nonproliferation acts, and sales to conflict zones.

With its procurement of armed drones and missiles in 2019, Serbia became the first European country to have an entrenched military cooperation with China. In addition, Serbian and Chinese security forces held joint anti-terrorism drills in the country, and China has donated military equipment to the Serbian army worth nearly EUR 10 million.

According to official Serbian documents, the country bought the Chinese medium-range air missile system FK-3, comprising of three batteries, in 2019. The purchase makes Serbia the first European buyer of this Chinese air defence system, which has a horizontal range of up to 100 kilometres and a vertical range of 27 kilometres. It can simultaneously hit six targets with 12 missiles.

In the same year, Serbia also bought six CH-92A combat drones, also known as Rainbow drones, armed with laser-guided missiles. The drones have an operating radius of 250 kilometres and a maximum altitude of 5,000 metres. They can be used for surveillance, attack, target location and tracking, and can direct artillery fire, including laser-guided rounds.

Serbian officials describe this acquisition of Chinese drones as a transfer of technology.

In 2010, Serbia’s Military-Technical Institute began work on its Pegasus surveillance drone, but the project was stalled for years before the Serbian/Chinese defence cooperation crystallised.

In 2019, a team from the Serbian Military-Technical Institute went to China to work on the redesign of Pegasus, which included adding combat capabilities. Serbian experts say that Pegasus operates on the same technology as the Chinese CH-92A drone, and the lighter Serbian drone will use Chinese laser-guided missiles. Beijing-controlled defence companies have made attempts to commence military-related production in Serbia, but it is unclear what has come of them.

In 2016, Serbia’s MoD signed an agreement on cooperation in defence with The State Council’s State Administration for Science, Technology, and Industry for National Defence (SASTIND). SASTIND is responsible for overseeing China’s state-owned defence-industrial   corporations   and   enterprises.

The military cooperation between two countries goes back a long way.  The countries signed their first defence cooperation agreement in 2008, and China made its first military donation to Serbia in the same year. Since then, the Chinese Ministry of National Defence has donated military equipment such as self-propelled machines; motor vehicles; integrated transport vehicles; special vehicles for the engineering battalion; rubber dinghies with outboard motors; and snowmobiles.

According to the Serbian Ministry of Defence, the country received defence equipment and resources worth around EUR 10 million from China between 2008 and 2018. Only donations from the US exceed this amount.

In November 2019, Chinese security forces implemented a joint anti-terrorist and hostage rescue exercise in Serbia. It is believed to be the first such drill for Chinese forces to be held in a European country. The exercises took place at Chinese-owned steel production plant HBIS in Smederevo, and was attended by 180 members of the two countries’ elite police forces.

One year later, two Chinese defence companies, the Aerospace Long-March International Trade Company (ALIT) and the China Precision Machinery Import-Export Corporation (CPMIEC), made large donations to Serbia to help combat the COVID-19 pandemic. The Serbian Minister of Defence claimed that the donation consisted of various medical devices and supplies, including mobile ventilators; monitors; infusion pumps; protective suits and masks; and contactless thermometers. The Ministry has declared that it received EUR 755,000 in donations of medical equipment in 2020.

Chinese state-controlled defence companies have also been active in the civilian market, especially in the infrastructure sector, with projects in wastewater and sewerage treatment.

In 2016, one of these companies was the Poly Group Corporation, a large defence company sanctioned by the US for violations of the Iran, North Korea and Syria Non-proliferation Act, and accused of severe violations by Amnesty International.

In 2016, a group from Poly Technologies met with the mayors of Serbia’s two largest cities to discuss a waste-to-energy plant (TE-TO Pančevo) and sewerage treatment facility (Veliko Selo). These projects were supposed to be financed through public-private partnerships, and the Chinese delegation included representatives from the China-Africa Investment and Development Corporation, a professional investment platform jointly established by Poly Technologies and the China-Africa Development Fund.

The development of TE-TO Pančevo began in March 2019, financed by Russian energy company Gazprom. China’s Shanghai Electric Group was given the contract for a turnkey construction on the site.

The China Machinery Engineering Corporation (CMEC) has been contracted for the construction of the Veliko Selo sewerage treatment facility, but work has been delayed because funding has not yet been organised.

Both the US and the European Parliament have expressed concerns about Serbia’s increased military cooperation with China. The former has warned Serbia about buying Chinese arms systems, and the latter has stated in a resolution that it has “concerns over Serbia’s increasing dependence on defence and security equipment and technologies from China, including a mass surveillance system in Belgrade and mass personal data collection without appropriate safeguards”.

B&H and Chinese defence ministries have met frequently, but are yet to sign a formal agreement. China has donated equipment to the Engineering Corps of the B&H Army on three occasions, and Chinese defence companies are active on the civilian market.

Although several high-level meetings have taken place between the two countries, they do not yet have a formal agreement on military cooperation.

As is the case in Serbia, Chinese defence company Poly Group is beginning to use its subsidiary the China-Africa Investment and Development Corporation (CAIDC) to look for projects. CAIDC also seems to be working closely with the China Machinery Engineering Company (CMEC).

In 2016 both companies entered the renewables market in the Herzegovina region, when they signed a Memorandum of Understanding with a local investor to build a wind farm worth EUR 150 million. The B&H government issued an energy license for the project in 2020.

So far, however, there has been no visible advancement in this project, and its predecessor Gacko I has made losses for the past few years.

North Macedonia has decreased its military cooperation with China in recent years, and has not contracted any defence companies for projects on the civilian market.

North Macedonia signed a defence cooperation with China in military science and technology in 2004, and until 2015 its government was “determined to continue to work intensively on the further strengthening and improving of the cooperation in the defence sector” with China.

The two countries have an extensive trade cooperation, and North Macedonia supports China’s Belt and Road Initiative. It has also allowed Chinese-financed infrastructure projects to take place within its borders.

In 2015, the North Macedonian government discussed large infrastructure projects with Chinese defence company Poly Group, but nothing seems to have come of these meetings.

Overall, military cooperation between the two countries has decreased since North Macedonia started negotiations to become a full member of NATO.

Major Chinese defence companies with activities in the Western Balkans