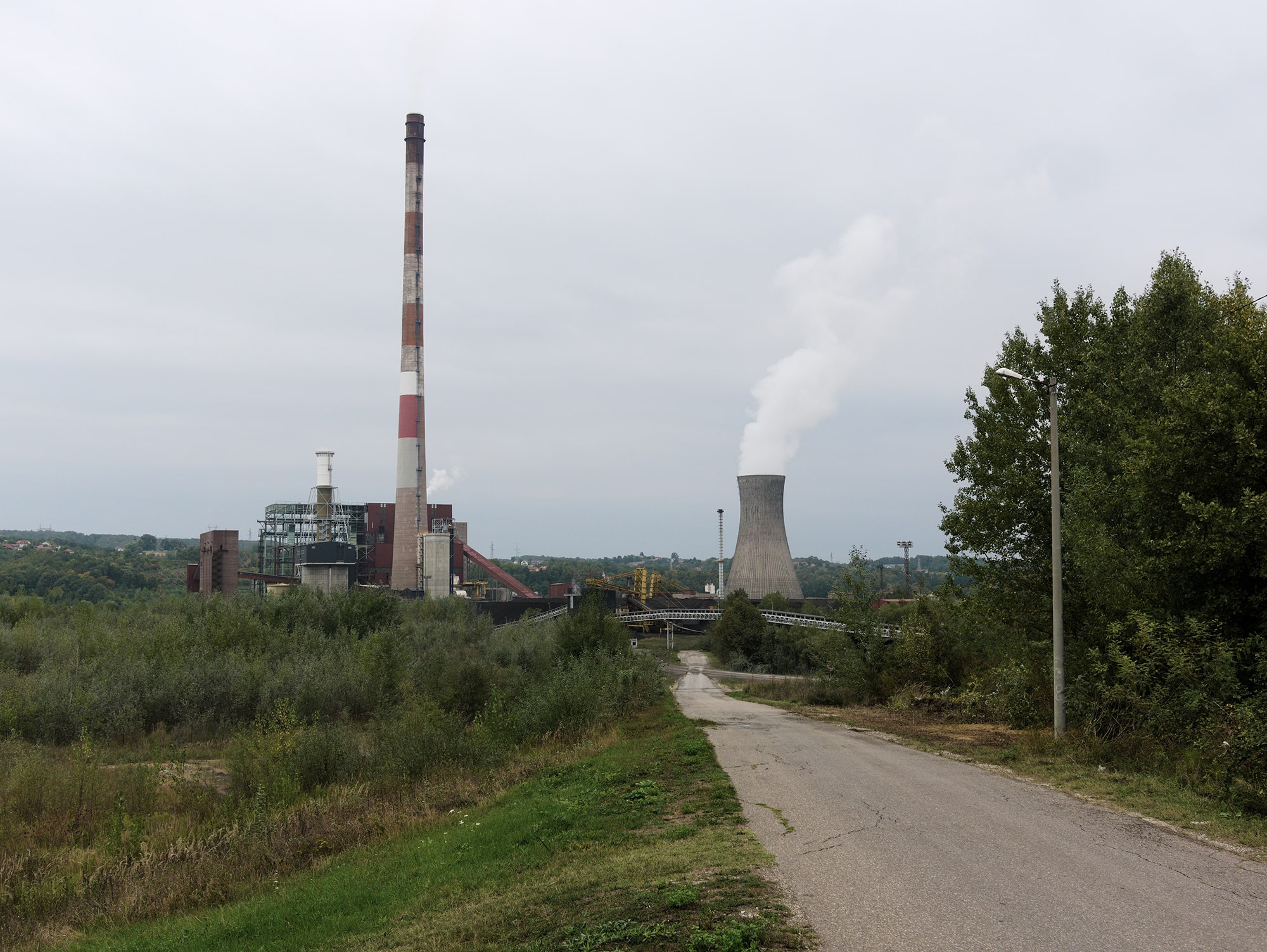 Despite the ongoing climate crisis and China’s recent international pledges to stop financing coal power abroad, several new power stations are still in the pipeline. Just Finance paid a visit to Ugljevik, a heavily polluted community in Bosnia and Herzegovina, where a new plant may be built with Chinese financing.

Mile Krstić is expecting a new neighbour: just a few hundred metres from his house, the ground has been prepared for the new coal-fired power station, Ugljevik III. His house is already surrounded by the city’s substantial coal industry: Ugljevik I, one of Europe’s most polluting coal fired station, are in front of it, and from his backyard he can look right into the huge Bogutovo Selo open pit coal mine.

Mile Krstić and his family have lived in this house since 1985, when it was surrounded by green fields and a forest. But when the coal business expanded, the forest was cut down and the land was excavated. Now he lives on the edge of a large coal facility. He wants to move out, but nobody is willing to buy the house.

Some of his neighbours in Bogutovo Selo, in the Republika Srpska entity of Bosnia and Herzegovina, have been compensated for their property by Cyprus-based Comsar Energy, or their partner, state-owned electricity company RiTE Ugljevik, who hold the concession to build the thermal power plant. But others either did not get an offer at all, or were offered less compensation than it would cost to buy a new apartment.

Because the entire community has been undermined by the excavations from the mining company over the last few years, the whole village needs to move. Many houses are now leaning or falling apart, while their owners desperately try to stabilise them with new concrete and steel bars. Some houses will be physically disconnected when the roads slide into the mine.

The house of Mile Krstić neighbour, Cvjetozar Todorović, has been severely damaged by the excavations. All the rooms on the top floor lean toward the power plant, and Todorović has had to fix alarming cracks in the walls more times than he can remember. The land is still sliding, and the problems keep getting worse. It is unclear if his house will still be standing in a year’s time.

At the other end of the large open pit mine, some houses and a road have slid down into the mine as a result of the excavations. It is likely that the village church will meet the same fate.

Ugljevik is not the only European town in which new power plants are planned, despite international commitments to stop climate change and the recent pledge from Chinese President Xi Jinping to stop financing coal power abroad. Several new plants are planned, and two are likely to be built with Chinese financing in Bosnia and Herzegovina alone.

Research from Just Finance shows that there is a major risk of new Chinese-financed power plants being built in Indonesia, the Philippines, and Serbia. All these projects were announced in 2021, and have a total estimated capacity of over 3,645 MW. In addition, there are Chinese-financed coal power projects planned in six countries throughout Europe, Asia, and Africa.

Every new power plant has an expected lifespan of 40–50 years. If put into operation, these plants will challenge international climate agreements.

The construction of many Chinese-funded overseas coal projects has commenced without obtaining the necessary legal environmental assessments and permits required by the country in question. Others have been delayed because of environmental or social impact scandals, or legal challenges.

This is also the case with Ugljevik III: In June 2021, it was revealed that a secret contract was signed for the plant between Chinese company China Electric, and Polish-Chinese enterprise Sunningwell International LTD. Prior to this, it was not publicly known that either company was participating in the project.

The project’s concession has been held since 2013 by Comsar Energy and RiTE Ugljevik, the latter of which is apparently owned by Dagestan billionaire Rashid Serdarov. In 2020, the Concession Commission of Bosnian entity Republika Srpska stated that the concessionaire was not fulfilling its obligations, but failed to recommend action to tackle the issue.

The secret contract led environmental organizations to express concerns and call on the Republika Srpska goverment to “publicly and transparently declare plans and epilogues of this power project ” of the project. In addition, no permits were obtained when preparations for the new power plant began.

Previously, Republika Srpska had allowed Comsar Energy to increase Ugljevik III’s projected output to 700 MW, which would contravene the entity’s Energy Development Strategy, and the policies of the Energy Community.

The Center for the Environment’s Majda Ibraković said: “The Ugljevik 3 project has plagued energy sector planning for many years, and the authorities have tacitly allowed the investor to violate all possible contracts and laws. Now, suddenly, Chinese companies have appeared from nowhere to save another dirty project that was doomed from the start. We are asking the Republika Srpska Government why it has not yet terminated the contract with Comsar Energy, and why it is even considering a new coal project in this area.”

Aleksandar Krsić, a lawyer with the Ugljevik Municipality, has submitted objections to the proposed environmental impact assessment on behalf of residents whose houses are not included in the mandatory expropriation. So far Comsar and RiTE Ugljevik have only compensated some of the people who live on the actual site for the construction. But Krsić claims that according to Bosnian law, all people living within a radius of 800 metres should be compensated.

Krsić said: “We are not objecting to this project. We just want all those affected to be compensated.”

According to Head of Expropriation at RiTE Ugljevik Nikola Teodorović, there is no deadline for expropriation, and the company is working according to the mining plans.

Teodorović said: “To my knowledge there are some 30-odd people still living in the affected area, while most others have already left and are waiting for the expropriation procedure to be completed. There is a group of people who have remained in the area, and who are definitely affected, and we’re trying to resolve their cases as fast as we can.”

In the community of Glinje, a few kilometers from the Ugljevik power plant, an ash disposal site for the new power plant has been planned. Surprisingly, very few people in the village (whose population mainly comprises Bosniak returnees from wartime displacement) seem to be aware of this.

The Community Association (MZ Glinje) President Abdulah Čolić, is, however, informed, and is fighting several battles with the municipality. Still, there is an imminent risk that the disposal site will be built next to the village.

Čolić unrolled a map of the village and its surroundings, and drew a line with his finger to indicate the planned location.

Čolić added: “There will be 11 step-like structures of ash in the valley. They will form a 70-meter wall of ash directly behind the village.”

In meetings with Comsar, Čolić has asked why the Environmental Impact Assessment neglects to assess the impact on Glinje, but so far he has not received an answer. Further, although the ash will reach almost all the way into the village, there are no plans to resettle residents.

“The ash disposal site will be catastrophic for the village. Who could live with all that dust?”, continued Čolić.

Some of the families in Glinje received the land as a gift from the state in 1922. Čolić has the land registry documents that prove the current residents are the lawful owners, and that the land is still being used by the descendants of the original beneficiaries.

But in 2007 the municipality amended the registry and made itself the owner of the land, without informing the residents. Čolić claims that this was done to facilitate the use of the land as a deposit site.

Abdulah Čolić is not descended from one of the 1922 beneficiaries, but he bought 23000 m2 from one of his neighbours in order to bring an administrative case to court, in an attempt to get the land registered in his name.

Čolić said: “This land grab by the municipality is just one example of how it has tried to appease Comsar. We are ready to protect the land with our own bodies if we have to.”

The burning of coal has seriously affected the health of residents in the village of Bogutovo Selo, next to the Ugljevik power plant. Mile Krstić recently lost both his wife and father to cancer, and blames the coal industry for their deaths. The mining and the constant stream of coal trucks that pass through release clouds of ash over the village every day.

But the worst pollution occurs when the nearby coal depot is accidentally ignited, which happens about 10 times a year, according to Krstić. He says that when the mining company puts out the fire, the whole village is covered in a toxic black smoke.

Krstić’s future now rests with Comsar, who he hopes will give him enough compensation to buy an apartment for himself, his eight-year-old daughter, and his mother, somewhere in Ugljevik.

“I would do anything to move my daughter to a safe place.”, Krstić concluded.

Comsar Energy RS (was established in the Republika Srpska entity in 2012, as a cooperation between Comsar Energy and state-owned energy company RiTE Ugljevik. Comsar Energy owns 90 percent of the company.