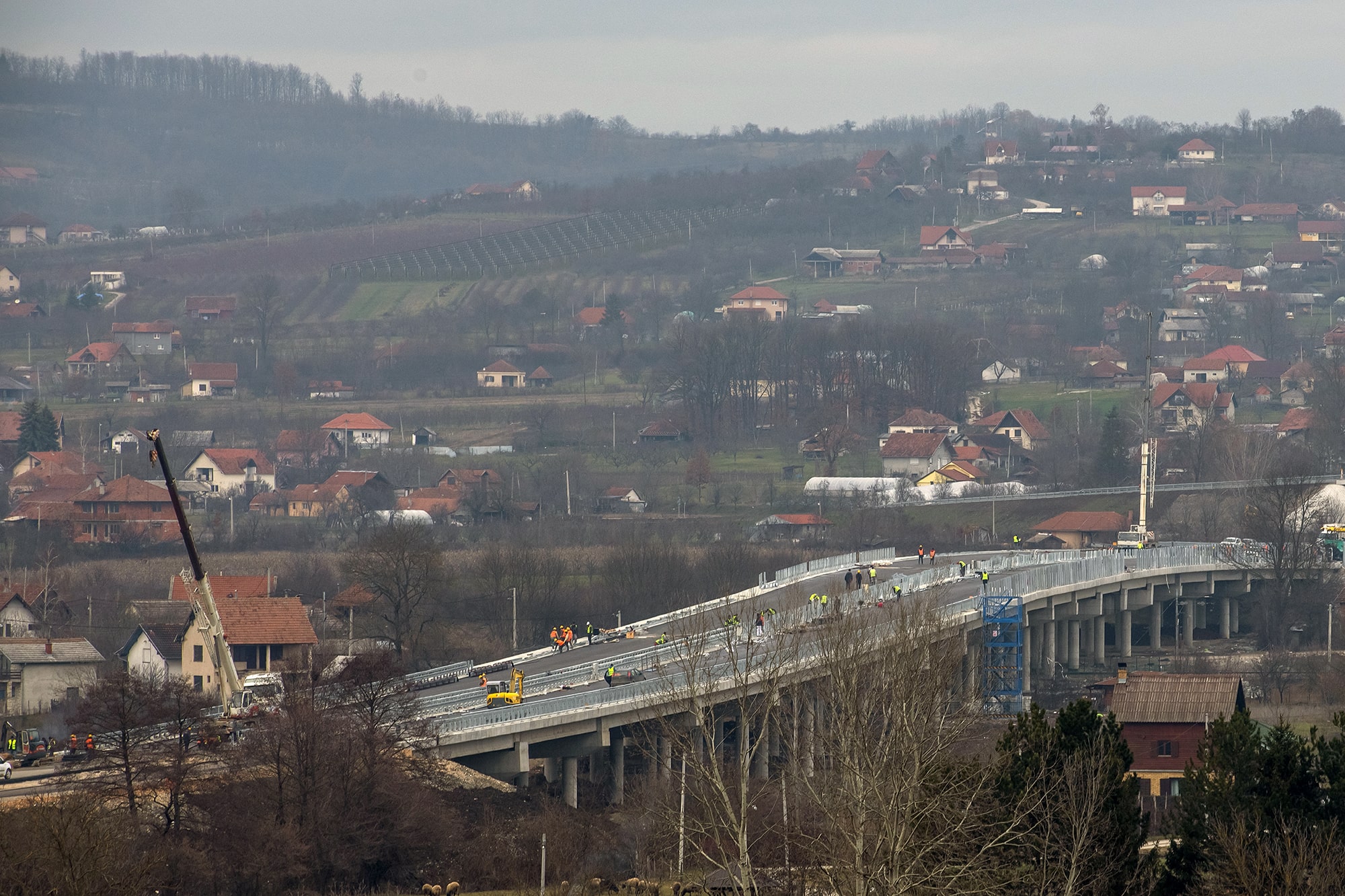 Highway E-763, which connects Belgrade and Montenegro, has been built with impressive speed outside the Serbian city of Cacak. But local communities complain of noise, pollution and devastated eco systems. The main contractor, Chinese state-owned company CCCC, is accused of excavating gravel for the road without obtaining the necessary permits.

There is a strong smell of exhaust in Dragan Boskovic’s garden, just outside the city of Cacak in western Serbia. Next to the house, where his family has lived since 1954, Serbian company Srbijaautoput recently started asphalt production to support construction of the new highway E-763, which connects the Serbian capital Belgrade to Montenegro in the east.

Although it is evening, and completely dark in Boskovic’s garden, asphalt production is unceasing, and there is a constant flow of trucks to and from the production facility. The noise from the plant makes every conversation a challenge. According to Boskovic’s mobile app, the air pollution is peaking this evening.

After the China Communications Construction Company (CCCC) started work on the highway, business for local entrepreneurs has flourished as enterprises that weren’t in the business before began supplying construction materials to the Chinese company.

The asphalt plant next to Boskovic’s garden has been operational since November 2021. It was built without his approval, and he claims he wasn’t even informed before construction began.

The 2016 master plan for this area provides only for residential and business facilities: no industrial facilities are permitted. Other asphalt plants in Serbia are located outside residential communities, for environmental reasons. According to Boskovic, the environment impact analysis for this plant indicated 24 negative effects. Despite this, the government approved it without a physical inspection.

Dragan Boskovic has filed a legal complaint with the local Serbian ecological inspection body, requesting an EIA and a stop to the works.

“This is about the health of my family. My grandchild and my son’s wife, who used to live on the property, had to move out. This is no environment for children to grow up in”, he said.

A few kilometres away from Boskovic’s residence, the river Morava runs alongside a local road. In May 2021, this was the site of a large excavation of gravel from the riverbed. Eyewitnesses estimate that several thousands of cubic metres of material were removed, and transported to the highway construction site by 200 trucks before the excavation was stopped by local activists.

Natasa Milivojevic from the Coalition against Environmental Corruption said it was a strong blow to the river’s eco system. The area is a bird habitat, harbouring more than 40 protected species, but many of their nests were destroyed during the May excavation.

Local media claim that the excavation was agreed between CCCC’s management and the local government. The Chinese company was in urgent need of high-quality gravel, and was permitted by the government to take it from the river. The company did not even have to pay the state the compulsory fee for excavating natural gravel.

A federal inspection of the site later concluded that the excavation was unlawful. According to Article 89 of the Law on Waters, gravel excavation may not be carried out without previously obtained water consent.

Today, the water in the river is running again, and the riverbed has been partly restored. But Natasa Milivojevic points out that the biodiversity has already been destroyed. She says:

“No one has claimed responsibility for what happened to the river’s eco system.”

In July 2021, the Coalition against Environmental Corruption filed complaints against CCCC, Cacak’s city administration and public company Srbijavode, as well as against private Serbian companies that excavated gravel for the construction of the highway without the necessary licenses.

The E-763 highway is part of the so-called Corridor 11, which connects Serbia, Montenegro, Romania, and Italy. It is expected to give an economic boost to the region, strengthen trade between these countries, and improve road safety.

Serbian authorities claim that it will provide jobs, and opportunities for domestic construction-related enterprises in the medium term. The Serbian Ministry of Construction, Transport, and Infrastructure issued a written statement, in which it said:

“The construction of the Belgrade-South Adriatic highway will not only contribute to the economic development of society, but will also stop negative demographic trends.”

The Serbian authorities also expect E-763 to create a better and faster connection with Montenegro, particularly the strategic port of Bar, “as the ultimate destination, which will enable Serbia to integrate into container flows, and attract an influx of international goods and passengers.”

Corridor 11 is also of high strategic importance to China’s Belt and Road initiative, and E-763 is regarded as a key access point to Central Europe and beyond. The highway’s Serbian part (between Preljina and Pozega), is being financed by a loan from The Export-Import Bank of China, and China Communications Construction Company (CCCC) is the main construction contractor.

Construction in the Montenegrin part, however (financed by the same bank and implemented by the same construction company), is facing major difficulties that may halt the whole Corridor 11 project.

The costly construction of tunnels and bridges through a mountainous area sent Montenegro’s debt skyrocketing, and forced the government to get its finances in order by raising taxes and partially freezing public sector wages. According to the International Monetary Fund, Montenegro cannot afford to take on any more debt to finish its ambitious road project.

The problems on the other side of the border do not change the situation for Dragan Boskovic. He estimates that 150 trucks loaded with asphalt pass his garden every day, and a maintenance contract awarded to Srbijaautoput means that production will continue even after the highway is completed.

A couple of months ago, Boskovic entered into a negotiation to sell his property to the company, but did not get an offer he could accept. Communications from the company subsequently stopped.

Just Finance has made several attempts to reach Srbijaautoput for a comment, but the asphalt company did not respond.

Dragan Boskovic is determined to fight:

“My civil rights are endangered, and I feel threatened by this company. I will take this to the European Court of Human Rights in Strasbourg if the Serbian legal system is unable to handle it.

Many complaints against Belt and Road’s biggest builder

China Communications Construction Company (CCCC), a Chinese state-owned enterprise (SOE), is one of the biggest in its field, and a major actor in China’s global Belt and Road Initiative. CCCC is the successor entity to China Road and Bridge Corporation (CRBC), also an SOE, was blacklisted by the World Bank between 2009 and 2017.

The CCCC and its subsidiaries have left a trail of controversy in many of the countries where they operate. The company was sanctioned for fraudulent practices by the World Bank between 2011 and 2017 for a highway contract in the Philippines, and by the United States in 2020.

According to former US secretary of State Michael Pompeo, “CCCC and its subsidiaries have engaged in corruption, predatory financing, environmental destruction and other abuses across the world.”

Other complaints about pollution or corruption have come from state agencies and environmental organisations in countries such as Malaysia, the Philippines, Sri Lanka and Uganda.